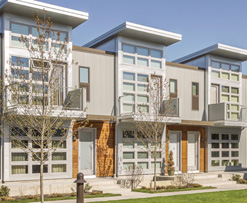 President of GFC and recipient of the 2009 Green Building of America Award, Charles Aggouras, commented, “We are excited to be a part of such an important community revitalization project such as Maxwell’s Green. The support of Governor Patrick and Mayor Curtatone has been outstanding. We share in their commitment to bring a new model for environmental conservation and sustainable living to the City of Somerville. Once completed, GFC will be seeking both LEED certification and NAHB Green status for the Residences at Maxwell’s Green.”

The Residences at Maxwell’s Green represents the first phase of a 199-unit multi-phase residential project permitted by KSS Realty Partners as a planned unit development. The site is situated on a future mass transit commuter stop and community bike path, and will share one of the largest open green spaces in Somerville. Governor Patrick recently presented the City of Somerville with $490,000 from a state transportation development grant program to help fund Somerville’s Community Path improvements that run through the planned development at Maxwell’s Green.

In a statement issued on August 30, 2010, Governor Patrick, said, “This important investment illustrates how prioritizing projects near public transportation can address the economic vitality of communities while creating private investments, and jobs today and for tomorrow.” “The Community Path is an immensely popular bicycle and pedestrian corridor through our city that links to the Minuteman Path west of Somerville,” said Somerville Mayor Joseph A. Curtatone. “This grant money will bring it right to the doorstep of the planned Green Line extension through Somerville.”